“New NAFTA” underway as the US, Canada, and Mexico sign agreement 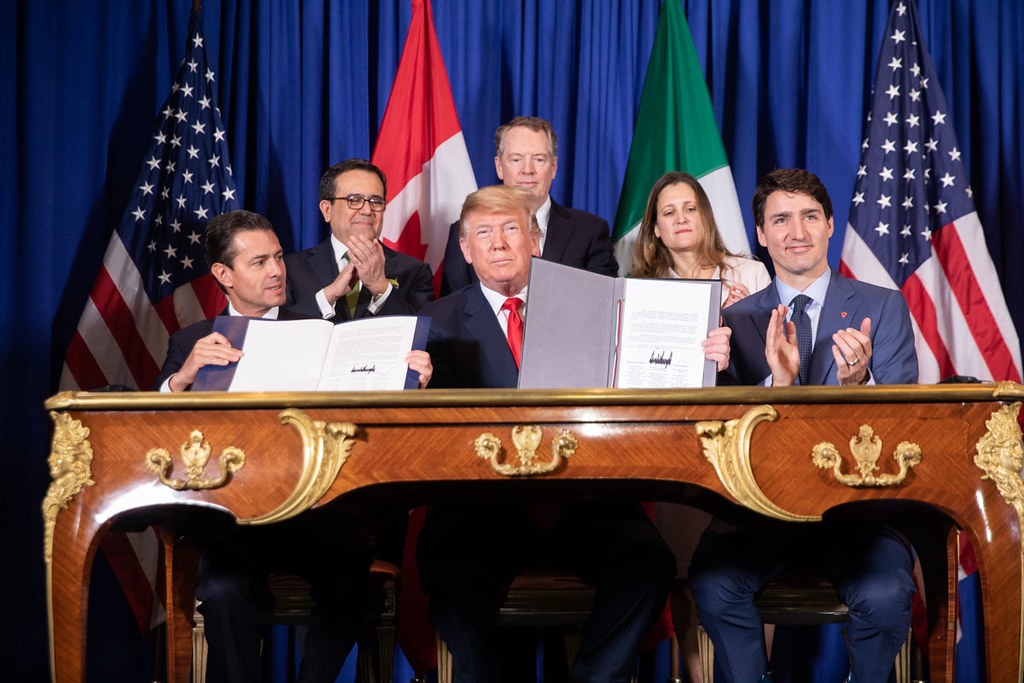 Dec. 11, Mexico City – the top US, Canada, and Mexico officials signed a deal that effectively overhauls the 25-year-old North American Free Trade Agreement (NAFTA) in favor of the U.S.-Mexico-Canada Agreement (USMCA). The new deal is going to be focused on improving and enforcing labor rights in the member countries, as well as eliminating patents for biologic drugs that were keeping the prices too high.

The ceremony was held in the capital of Mexico. Among the top officials were Robert Lighthizer – the U.S. Trade Representative, and Jared Kushner – the U.S. White House adviser, Mexico President Andres Manuel Lopez Obrador, and Canadian Deputy Prime Minister Chrystia Freeland. It is an agreement that demonstrates for many politicians and analysts successful cooperation on a multinational level.

The resentment towards NAFTA, this quarter-century-old trade agreement between three of the biggest North American countries, was initiated after Donald Trump was elected president in 2016. Mr. Trump has always opposed NAFTA, going as far as mentioning that it’s the “worst deal ever”. He blamed the deal for stealing millions of US manufacturing jobs to Mexico, Canada, and even other external countries like China.

And his three-year campaign to overhaul NAFTA finally came to fruition as Canadian and Mexican leaders somewhat reluctantly conceded to join the negotiation process.

Initially, the USMCA deal was signed over a year ago. However, the Democrats who were controlling the House of Representatives demanded that before putting it to a vote, a more comprehensive clause regarding workers’ rights and environmental policies had to be added. Over the past year, these delays have threatened to outright terminate the whole deal, as well as causing the investment uncertainties in all three member countries.

However, during the recent weeks, negotiations between Democrats, Trump Administration, and the Mexican government took the upcoming deal out of the uncertainty, adding more specific rules on labor rights in it. These clauses were more directed towards Mexico, where the low-wage jobs are creating some advantages for the economy while the US and Canada are being damaged. As these latter two have agreed, there will be an independent labor controlling mechanism that guarantees Mexico’s compliance with the newly-agreed-upon union rights.

As it turns out, the new deal seems more acceptable for the Democrats, both they and Republican lawmakers agreeing that it’ll bring some 12 million jobs back to the US, while boosting the continental trade volume to $1.2 trillion annually.

However, the timing of this deal enactment is a bit interesting. As Donald Trump is becoming the fourth US president in the country’s history to be formally impeached – or at least, face the impeachment, this process will coincide with the signing of the new USMCA deal.

As Trump himself puts it, this is the “silver lining” of the impeachment process that Congress has initiated. However, things aren’t that ideal and bilateral as they seem: as the US Senate Majority Leader Mitch McConnel mentioned, it would be better if the vote was put to hold until the impeachment trial was over. This is an unfortunate development for the deal itself because it would probably hold the ratification process until at least next year.

But the US Congress isn’t the only problem here. The clause that enforces stricter labor laws in Mexico has been overly criticized in the country. While the US and Canada have agreed upon creating an independent organ that would check Mexico’s compliance with its labor duties, the Deputy Foreign Minister Jesus Seade denied this idea, saying all disputes and differences would be discussed on the actual panels.

As for private companies and individuals in the country, some of them state that their leaders ceded too much to their US and Canadian counterparts. Some have even called them out for their bad negotiation skills. On the other side of the spectrum, some businesses concentrated on the positive aspects of the deal and praised Jesus for agreeing upon more civilized labor laws.

As things are moving forward, both Republicans and Democrats in the US, as well as Canada and Mexico, are optimistic that the USMCA deal will deliver better results for their economies.