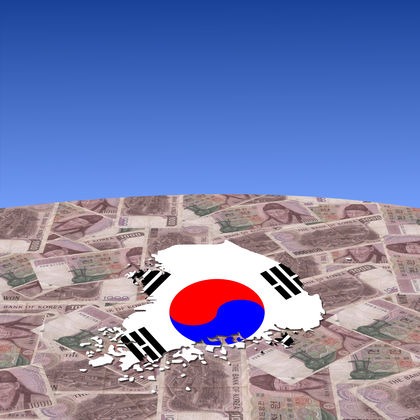 The phrase ‘rags to riches’ can summarize the growth of South Korea’s economy in the past decade. In what is now referred to as the Miracle on the Han River, South Korea came from being a developing country to joining the largest economies in the world. Right now, it is the world’s 11th largest economy by purchasing power parity and is one of the fastest growing economies in the world, contributing 2.22% of the world’s GDP.

That alone should be enough reason to consider looking at South Korea’s economy. Even more so now with all that is going on between the US and North Korea. There is also a lot going on within the borders, which makes the analysis all the more interesting.

How is South Korea’s economy doing?

South Korea’s economy grew consistently through most of 2016 following faster growth in manufacturing and utilities. Even with these positive signs, it was still the lowest growth than the previous six quarters. GDP growth in 2015 was 2.8%, but the average growth in 2016 dropped to 2.7%.

Starting October 2016, investigations were done to find out just how much influence Choi Soon-sil had over then President Park Guen-hye. Several corruption allegations came out from the investigation, leading to her impeachment on the 9th of December. During this time, there were massive protests around South Korea, and these were the main driving force for the slow GDP growth in the final quarter of 2016.

The upcoming presidential elections will be held on the 9th of May, and the decision will be crucial to South Korea’s economy through 2017 and the years to come. The top two leading candidates are Ahn Cheol-soo and Moon Jae-in. the latest polls show Moon Jae-in in the lead by a considerable margin. The incoming president will have to deal with the rising tension between the US and North Korea, and the candidates’ views will affect South Korea’s economy. Moon believes in dialogue, proposing that South Korea take the lead in negotiations with North Korea rather than China. He has also been quoted saying that the country should stand up to the US. Moon’s presidency would probably hurt South Korea’s economy because it would hamper the country’s exports, which are crucial.

On the other hand, Ahn believes South Korea should attack the north first instead of wait for an attack. Regarding the US, he has said that he would not change the trade agreement between their two countries. Under Ahn’s leadership, South Korea would probably take a tougher stance on North Korea, which would require more budgetary allocations to the military and perhaps slowing GDP growth. However, it might improve relations with the US and help to strengthen the export sector.

Given the gap between Moon and Ahn, the former is more likely to win. Furthermore, there’s an argument Ahn’s administration would not be able to pass any bills through parliament. Moon would have 119 parliamentary seats from the democratic side while Ahn would only have 40 from the Conservatives. The latter’s administration, therefore, would have a hard time passing any legislation.

Outlook and predictions for 2017

The latest data on the first quarter of 2017 show that South Korea’s economy has bounced back from last year’s slump. The GDP growth rate was 2.7% Year-on-Year and had a 0.9% quarterly increase. Experts had predicted a 0.8% quarterly GDP growth rate, and the higher figure indicated a quickly recovering economy. Responding to these results, the Bank of Korea has revised its GDP projections from 2.6% set in January for the entire year to 2.7%.

Although spirits and hopes are high on South Korea’s economy, a lot of uncertainty lies ahead. In particular, tension between North and South Korea may discourage investment and domestic consumption. Kim Jong-un recently threated to destroy a US submarine in South Korea if it got any closer to the north. Such tough talk gets people worried, which explains why there was stagnant spending in the first quarter of this year.

On a positive note, Moon Jae-in’s administration may cool tension between the two Koreas and relieve fear of attacks. Even so, projected GDP growth rates seem unattainable given that more revenue will be allocated to the military regardless of which president takes power. For 2017, we expect South Korea’s economy to remain the same, or even contract slightly.