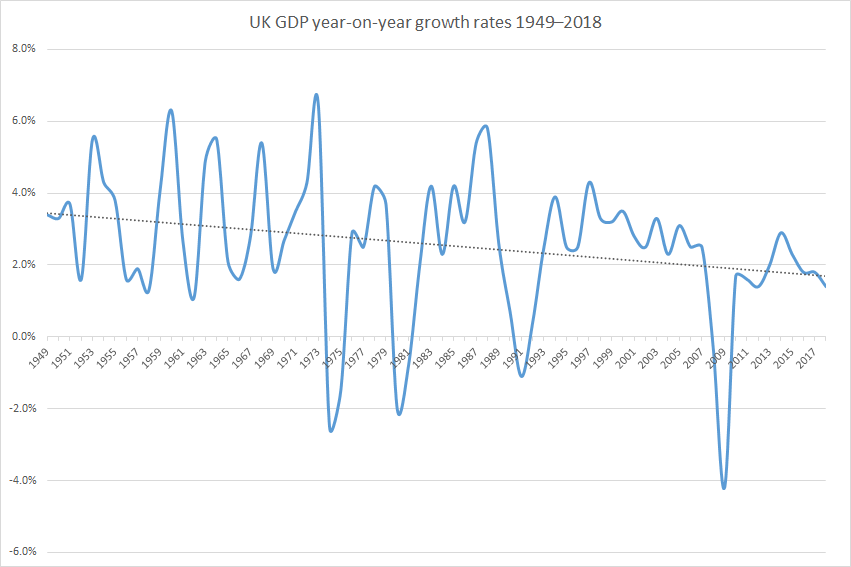 As the internal political turmoil persists, the UK economy is still showing an underwhelming growth for the third month in a row. In October, the economy flatlined in its current expansion rates, while the previous two months were a downright slope towards contraction.

While the country’s service sector grew 0.2% in the August-to-October period, the 0.7% and 0.3% contractions in manufacturing and construction industries respectively quickly balanced out that expansion. According to the Office for National Statistics (ONS) of the UK, this is the first three-month-period that the country’s economy slowed down this much after 2009 and the global financial crisis of 2008.

According to ONS, the reason for this contraction is undeniably the political crisis that’s been going on in the country for a while now. First and foremost, the never-ending BREXIT process has crippled the economy and the trust towards it globally. After the 2016 referendum decided the fate of the UK’s membership in the EU, the country was given a two-year period to put its affairs in order and initiate the so-called “divorce”.

However, the Theressa May government wasn’t able to deliver the “deal BREXIT”, which would effectively retain some of the privileges and trade agreements between the two parties. While May’s government had several projects prepared, the parliament didn’t pass any of those. After May, Boris Johnson took the Prime Minister post mainly due to his claims to deliver Brexit, be it with a deal or no deal at all.

And as Johnson is pushing the EU to concede on some matters, he has voiced his position that no matter what, the January 31 deadline will be the last the UK has received from the organization as it’ll no longer wait for further concessions. This uncertainty has definitely been one of the reasons why the UK economy slowed down in almost every major industry.

Another big contributor to this crisis is the upcoming general elections of December 12. As all parliamentary elections do, it deepened the political conundrum in the country. However, there are particular, more specific aspects of this problem as well. For instance, two days before the elections, on Tuesday, Boris Johnson’s ratings have plunged drastically, reducing the chances of the Tory majority in the parliament.

As Thursday’s election is slowly approaching, its inconclusive results could deteriorate the situation and disappoint the investors, as well as domestic producers to the point where their output declines even further.

As some economists and analysts suggest, the 2020 global economic forecasts are already pretty weak and the UK’s challenges are certainly going to be affected by that. According to another, and quite opposite opinion, while the 2019 economic conditions are overly subdued, things might be looking up for the next year as the BREXIT process slowly comes to its decisive conclusion and there won’t be major elections. But that’s the point: the political and economic environment must indicate some kind of orderliness if the economic expansion is to get back to its pace.

As for the pound, the British currency showed a 0.2% increase at the beginning of the week, however, it quickly slashed by the same 0.2% after Johnson’s reputation and lead reduced in the polls before the upcoming election.

And when it comes to trade balance, the ONS published a separate report which indicates that the UK’s trade deficit expanded by almost £14.5bn, which is more than expected form the same deficit balance in September at £11.5bn.