McDonald’s Stock Falls by 3%, as Company Announces Changes in Leadership 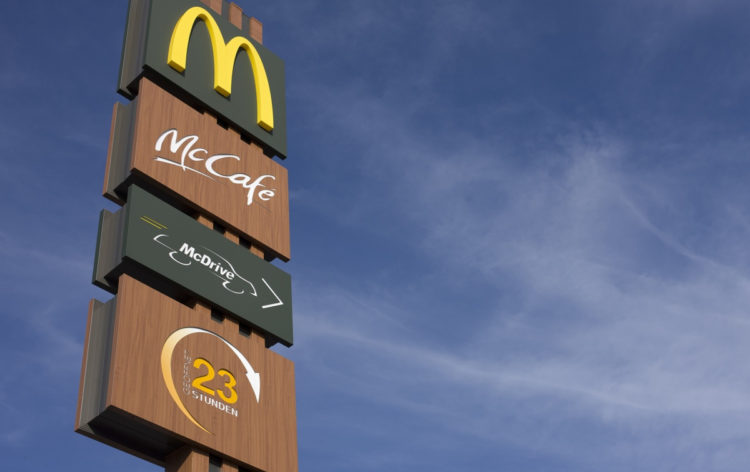 During the Thursday trading session on the New York Stock exchange, the McDonald’s Corporation (MCD) stock fell by 3%. Yesterday, MCD closed at $195.80, yet today it declined to $189.30.

The move came after the President and the Chief Executive Officer of the firm, Chris Kempczinski announced some significant with the company leadership. According to this statement, Alistair Macrow was promoted to the role of global Chief Marketing Officer. As the CEO of the company mentioned, Macrow has a reputation for ‘setting a bold vision and driving meaningful results’. The decision came after the firm’s Senior Vice President of Global Marketing, Colin Mitchell left the organization.

Having some change in the executive level is not as much of a bad news for the company, however, it seems like that the 1,000+ point decline in the Dow Jones Industrial Average index also played its role in dragging down the MCD shares.

After the outbreak of the COVID-19 pandemic, the company faced serious challenges. The restrictions and lockdowns imposed during this period meant that the firm had to close most of its restaurants across the globe. McDonald’s corporation still earned some revenues by delivering its products to customers, but obviously it was much lower than during the previous year.

In order to preserve its financial flexibility, the company management has taken several steps. Firstly, the firm suspended its share repurchase program. From 2017 to 2019 the company has returned more than $25 billion to shareholders through dividends and stock buybacks. So obviously, with this step, McDonald’s can save billions of dollars without taking its quarterly dividend payments away from its shareholders.

The first-quarter report also stated that the firm borrowed $6.5 billion to improve its capital position. This is essentially a precautionary step. If the economic conditions worsen the company might have to inject some serious sums into the business to stabilize the situation. On the other hand, if the situation improves and things return to normal, the firm always has the option to repay those debts and consequently, save money on future interest payments. So this essentially gives the management a certain degree of financial flexibility in economically challenging times, which is always very handy.

Finally, the firm announced that it intends to reduce capital expenditure by $1 billion. So unlike in the case of bank loans, the company does not have to pay back the money which is retained by the cancelation of its stock repurchase programs and reduced capital spending, which can be very helpful in times of an economic downturn.

Mcdonald’s shares had an impressive growth over the years, rising from $14 back in 2003 to $217 by August 2019. This means that during the 16 year period, the stock has risen 15.5 times, which is indeed a very rare achievement, even in the stock market. The stock achieved an all-time high in August 2019, however during the subsequent months, it faced some significant correction, which pushed the price temporarily below $200 mark. From December 2019 MCD resumed its uptrend and by February 2020, returned to the all-time highs of the previous year.

After the outbreak of the COVID-19 pandemic, due to the above-mentioned reasons, the stock price fell significantly, dropping from $217 in February 2020, to $128 during the following month. The stock has a very low beta of 0.50, which means that it is approximately half as volatile as the Dow Jones Industrial Average, so such a dramatic collapse in a short period time is rather surprising.

However, unlike with many other stocks, the recovery here was quite swift. After making steady gains, the McDonald’s shares have already returned to $200 level by June 2020, essential erasing nearly all of their losses during the year. The stock did lose some ground during the recent days, now trading around $189.

On the positive side, the firm still maintained its quarterly dividend payments. The actual growth rate of the dividends is indeed quite impressive. Adjusting for the stock splits, the firm has raised those payouts from just 3 cents per share in 1995 to $1.25 by the end of 2019. This means that the average growth rate for those payments during this period is just above 16%, which is notably higher compared to many other blue-chip companies.

According to CNBC, the latest Earnings per Share (EPS) indicator of the company stands at $7.63. This means that the current Price to Earnings (P/E) ratio of the firm stands close to 24.8. So at current prices, on P/E basis the stock can be slightly overvalued. The current dividend yield of MCD is 2.6%.

This might not be as impressive as with some other stocks, however, it does have three advantages for investors. Firstly, in times of near-zero interest rates, earning a 2.6% return, payable on a quarterly basis, is not such a bad proposition. Secondly, the McDonald’s corporation has a very high rate of dividend growth, so the company might not manage to keep increasing those payments by 16% on average, however, investors can certainly expect some notable hikes in the years to come, increasing their returns in percentages, as well as in purely monetary terms.

Finally, the payout rate of the company is currently just below 66%. This means that the company still has plenty of margin of safety to face current economic challenges and keep returning money to its shareholders, which is always important for investors. So, in general, MCD is a decent stock for income investing.

When it comes to growth investing, we might conclude that at current prices the stock is still slightly overvalued, so investors might have to wait for a while for MCD to make some substantial gains. We have to keep in mind that the firm has already canceled it share buyback program and might not restore it at least until the next year.