Mexico economy predictions and forecast for 2017 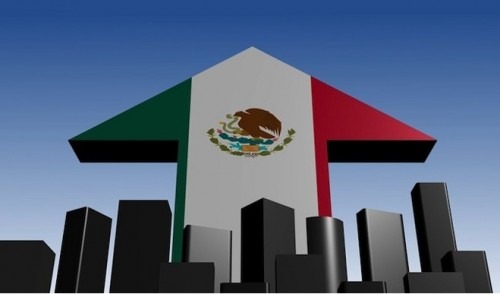 As the second largest in Latin America, the Mexico economy is worth looking at.

Past performance of the Mexico economy

GDP growth slowed in 2016 compared to the previous year, 2.3% down from 2.6% annual GDP growth. According to eFXto.com, the country’s economy has been plagued by increasing inflation and decreasing income from oil exports, leading to slow growth. Industrial output had also decreased, which lowered the value of exports and raising the budget deficit. This past year, the main sources of growth came from a decrease in imports and an increase in workers’ wages, reducing capital outflows and increasing consumption.

Outlook for the Mexican peso

When the results of the US elections came out, the Mexican peso lost about 15% of its value to the US dollar. In the weeks leading up to the elections, it had actually gained strength due to an increase in Foreign Direct Investment (FDI), which had reduced the current account deficit. Nevertheless, 2-months’ appreciation in value was wiped out within hours, and then some.

As 2017 rolled in, the peso continued to be pummelled by Trump’s comments and tweets, causing further damage to the currency. Then the tide shifted after soft data from the US came in and the peso regained strength gradually. Strong economic data in the first quarter of 2017 also helped to boost the peso’s strength, taking it back to the pre-US election levels.

2017 forecast for Mexico’s economy in general

The current administration seems to be taking a different approach in an attempt to rebuild the Mexico economy in 2017. Previously, exports had decreased despite a devalued peso, but now there are measures to reduce inflation. Overnight interest rates were raised from 3% to 6.25%, and then to 6.5% starting March this year.

It is an attempt to move into a protectionist system that depends less on international trade but focuses on local production and consumption. This is also why the Mexico economy is being focused away from oil exportation, which had disrupted the economy in the recent past.

So far, these measures seem to be working, as can be seen from the growth in the first quarter of 2017. The figures show GDP growth rates at 2.7% for the quarter ended 31st March, which was an increase from 2.4% growth in the final quarter of 2016. This was also significantly higher than what experts predicted would be a 2% growth. Looking at the data, the growth of Mexico’s economy can be attributed to the services and agricultural sectors. The former had a 3.7% growth rate above 3.4% in the previous quarter while the latter enjoyed 6.9% growth above 6.4% in the previous quarter. Industrial production also went up by 0.2% after stagnating in the 4th quarter of 2016.

You will notice how GDP growth follows the administration’s plans to move away from external reliance, and that it’s working. However, Mexico is not out of the woods yet, and there is still a lot that remains unknown to definitively forecast how the economy will perform in 2017. The US president is still considering a modification to the NAFTA deal, which would be a blow to a country that exports 48% of its produce to the US. The only positive take from this is that Trump has stepped back from stating he would revoke NAFTA completely. That means the Mexico economy is safe from any sudden turmoil, at least for this year. Projected GPD growth rates for 2017 at the beginning of the year were as low as 1.5%, but that was before economic data for 2017’s Q1 became available. Now, you can bet there would be a lot more hope for the Mexico economy.

It is now clear that the Trump shock has dissipated and that Mexico’s economy is chugging along well enough. Nevertheless, Mexico is at a precarious point delicately balancing internal and external pressures, which makes it difficult to provide a concrete outlook. For now, though, it seems Mexico is safe, but any changes in foreign policy, particularly from the US, will put a dent on the Mexico economy.