Shaky Pound and Brexit CountDown – What to Expect? 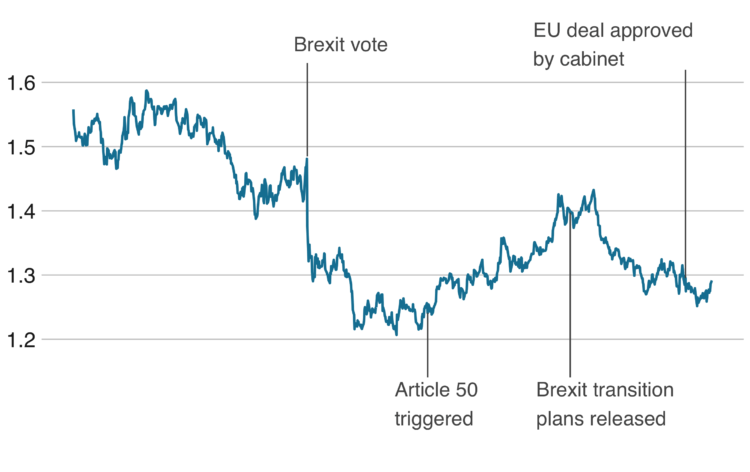 The pound has totally shot up in the past week. Its high volatility seems concerning for many although, the up-coming 48 hours will have crucial importance in terms of determining its fate.

As the British Prime Minister Boris Johnson eagerly awaits to take the U.K out of the European Union, the traders and financial centers remain on edge with confusion. Cranking out an agreement before the infamous October 31 deadline will have a huge impact on the way matters turn out for the pound.

Johnson has scheduled a meeting with EU leaders on Thursday, and the session of the UK parliament which many have addressed as ”extraordinary” is set for Saturday.

As of 5.55 a.m pound was trading above $1.29 with the news that the European Union official and the U.K had seemingly agreed on a new Brexit deal. However, after the intervention from a small political party of a Northern Irish origin which declared that it would not support Johnson’s proposals in their current form, the pound dropped against the dollar by 0.6%.

According to a number of analysts, if the Prime Minister somehow manages to secure a deal in order to avoid the rupture of trade and economic ties brought along by Brexit chaos, the currency may very well leap as high as $1.35 or, some even suggest, $1.40. The senior foreign-exchange strategist at Rabobank Jane Foley suggested that the pound volatility is not bound to vanish any time soon. It is very likely to remain high for a considerable amount of time since the reactivity of the currency goes face-to-face with the headlines as they are made.

Unfortunately, the procedural difficulties have not left Brexit’s side since the day it was first announced. This has had a negative impact on the pound’s stability which can be supported by appropriate statistics. One of the most traded currencies in the world was worth approximately $1.50 before the vote to leave the European Union would emerge in 2016. Its value dramatically dropped since then, especially posterior to the referendum. and in the duration of the following three years, it has been fluctuating below $1.35.

Economists insist on Brexit uncertainty damaging the country’s economy in a number of important ways. Most notably, by affecting business investment and manufacturing. In fact, as the records from the Center of European Reform indicate, the UK economy has shrunk by 2.9% since the British voted in favor of leaving the European Union. As for investors, the major issue is the lack of clarity which is so needed at the moment of such high stakes.

Behind-the-curtain negotiations have been conducted between the United Kingdom and the European Union apriori to the EU summit in Brussels on Thursday. As it seems, Prime Minister is in urgent need of the green light from the leaders of the member states in order to make some progress and move forward.

Despite the pound gaining six cents against the dollar in the duration of the past week and exhibiting the possible signs of grave progress, it will still be challenging for the EU and the UK to evenly resolve their differences in time. What may not be possible is the concessional action-taking that Johnson is trying so eagerly to achieve. The latter is aimed at Europe over the land border with Ireland, in the absence of alienating lawmakers back home. Prime Minister is truly stuck in between fairly harsh balancing operations, it seems.

Oliver Harvey, Deutsche Bank strategist noted to his clients on Wednesday that the constructive outcomes that are being discussed rest, in entirety, on Johnson’s ability to at least reach a political agreement of some sort with the member states of the EU 27 in the up-coming 24 hours.

A currency broker and the senior market analyst at Oanda, Craig Erlam, predicts the strong currency reaction in Asia, specifically on Sunday when the markets will have an opportunity for the first time to start trading the pound after the parliamentary session scheduled for Saturday. For the sake of safety, Erlam also pointed out that nothing could have been said surely as the degree of unpredictability as to what may happen for the next eight hours is truly unmatched.

If European and British lawmakers fail to reach an agreement satisfactory for all parties involved, the Prime Minister will have to request another delay for the Brexit deadline. However, if the opposition Labour Party rolls out the approval, the government will have a chance to trigger a general election.

Global head of foreign exchange strategy at TD Securities, Mark McCormick has sent out warnings with regards to the pound’s rise. He reckons that such a tendency incites more bad news.

The clients of the Goldman Sachs, on the other hand, were prompted to make bettings on pound’s upheaval against the dollar. The general predictions included the leap of the sterling to $1.30 when the deal happens.

In whatever direction things take a turn, one thing is inevitable – pound is facing notable pressure.