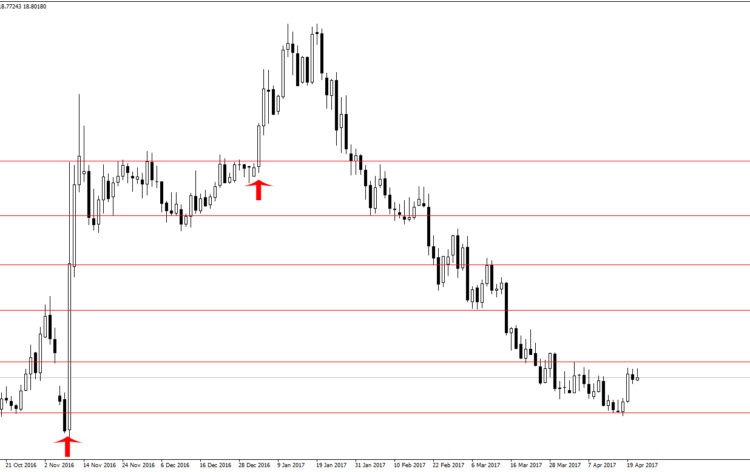 The Mexican peso has been a proxy currency for other developing and emerging economies in the world. Changes in the value of the peso have always reflected more than just Mexico’s economy, and that gave it the proxy status. Besides that, it has a lot of liquidity while still avoiding any capital controls, which investors prefer.

However, its position as the proxy currency has been shaky ever since President Trump took office, and an analysis for the rest of 2017 is necessary to all investors.

Recent performance by the Mexican peso

Throughout his campaign, Trump repeatedly pointed at Mexico for “taking our jobs”, promising to impose tougher laws. For a country that depends on 48% of its exports to the US, such remarks were threatening to the Mexican economy. Which is why the peso plunged 12% against the US dollar on the 9th of November after the US presidential election results were announced. This has led to quite harsh consequences for the Forex brokers in Mexico as well as the traders.

It wasn’t clear whether the new president was going to follow through on his promises regarding renegotiating the North American free-trade agreement (NAFTA) and building a wall. Then when Ford withdrew its plant from Mexico, signs were clearer that it was truly a different environment.

There have been 11 new vehicle assembly plants by North American companies set up in Mexico since 2011, and a withdrawal by these companies would certainly hurt the peso. Ford’s withdrawal alone caused the peso to drop more than 2% against the US dollar on the 3rd of January after the news, and a further 2% after the president lashed out at GM for not doing the same.

So far, the peso is trading at levels 12% lower than it was before the elections since it has been trading at range ever since then. It has been in range for the past 4 months, and this has taken away most of the liquidity which made the currency a favorite emerging market proxy.

Investors are avoiding the peso because of uncertainty, and this has also contributed to the lack of liquidity. Mexican President Enrique Peña Nieto has not failed to respond to Trump’s tweets, and this has soured the relationship between the two countries, making the peso the worst performing currency. Replacing the peso as a proxy currency may be the Brazilian real or the South Korean won, both of which are fairly liquid and have no capital controls. The won seems like a better candidate given the past economic performance of the Brazilian economy.

So far, the Mexican peso is still very volatile and is very much on the fence in the direction it will take. Right now, the currency responds very quickly to headlines and it is still very difficult to know which direction it will take. It will not be a quick process, and Trump is currently looking at how to amend the NAFTA agreement. There is no doubt this will happen, and the only question is whether the new terms will be too aggressive. If so, you can expect the peso to drop even further and vice versa.

It seems clear that the value of the peso is still very dependent on the US trade policies, but Mexico’s central bank is taking measures of its own to stabilize inflation that arose from the weak peso. Interest rates, for one, were raised from 3% to 6.25% and also announced there would be a swap program to boost the peso. Signs point to an increasingly isolated Mexico, and the high volatility we see in 2017 may begin to dissipate in the coming years.