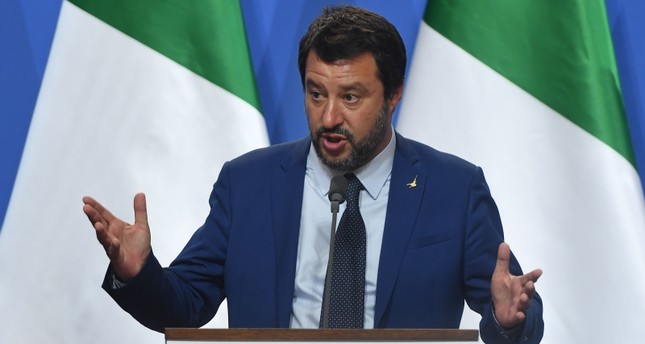 The situation in Italy’s government is becoming a little tenser as time goes on. The reason for this is pretty simple: the political powers that are currently within the ruling class are not getting along well, with the economic problems that the country is facing becoming the main reason for the conflicts. The Deputy Premier minister, Matteo Salvini has been acting as the main voice of the political issues being announced within the government, driving the pressure on the ruling coalition of the country to increase every day. According to Mr Salvini, something is broken within the government and he would rather see it fixed than have to disband the government, as he has been threatening.

The de facto leader of the country, Matteo has been spending more and more time speaking loudly about the issues that the country has been facing. Specifically, regarding the economic troubles within Italy, and there have been plenty of those. Italy has had some of the hardest falls in terms of productivity over the past few years, resulting in a shrinking economy. And now, the ten-year yield premium over Germany has been getting wider than it has been in a month, which is another sign of a complicated situation. Matteo Salvini has been using this as a reason to further his talking points, mentioning how the ruling class has been failing to achieve anything in terms of growth for Italy.

According to him, something has broken down within Italy, and unless it gets fixed, nothing the Italian economy is not going to start growing. Salvini has made it a point, over the past few days, to say that he would be replacing the current government if they are not going to push his agenda of revitalizing the economy of the country. His threats have not been veiled at all, saying that he would be considering replacing several key political figures within the government in order to achieve his goals. According to Salvini, the best solution to the issues that the country is facing are some extreme tax cuts combined with investment into the local economy. He believes that this is a better solution, even if Italy ends up going against the EU’s wishes and requirements.

It seems that the populist message being promoted by the Italian leader has been reaching the ears of many of the locals. According to polls, Salvini’s popularity has been increasing, and his coalition is currently close to around 40%. This would allow the coalition to govern on its own. But, would go against the EU be in the interest of Italy? After all, doing so once resulted in some very big damage being done to the Italian economy. And while Salvini tries to use the economic situation within the country as a platform for his loud campaign of discontent, it would be hard to ignore the fact that economic slowdown has been affecting the entire world and the EU, making Italy not be the only one that has been facing some serious issues.

A dangerous campaign of discontent

In order to strategize better, Salvini decided to stop campaigning, cancelling the rallies he had been planning in Rome and instead deciding to stay with his advisers to do some planning. The planning session ended with the decision to meet with the Prime Minister of the country, to discuss the demands he had for the government and to threaten him. Salvini has made it clear to the Prime Minister that he will only have until Monday to do what Salvini wants, or else he was going to be meeting with the President of the country to discuss the process of breaking the government up for being ineffective.

The demands do not only concern tax rates and investment. The team that Salvini gathered, decided that one of the best strategies to go with would be to demand the ousting of several key political figures within the country. Specifically, Minister of Transportation as well as the Finance minister and a number of other cabinet members. He then made a speech on Wednesday addressing his main political rivals within the ruling class, saying that he was thankful for them listening to him and for their service, but that he was not looking for additional posts for his own coalition. Rather, he wanted to bring positive change to the government, so that growth could be achieved and a more positive outlook on the country’s economy to be had.

During the speech, he used a rather strange allusion to marriage in order to point out that the constant arguing and bickering within the government was not helping the development of the country and was only resulting in stagnation. Then he went on to say that the better way of going about would be if the government would stop arguing with itself and dedicate time to coming up with a solution. While the sentiment is interesting, saying this might be a sign that he is indeed looking for more positions within the cabinet. After all, the only people who are not going to be arguing with him are the ones who are going to come from his own team.